All development of pixel art, maps and other graphics.
Post Reply
158 posts

I like it really much but I think it is a bit too big compared to the player frames.

The tall candle stand is supposed to be 3 tiles high as I envisioned it but really it depends on how and where it might be used.
for the crypt I could see this larger sized fixture...

I can of course do a shorter version... but I already have different sized candles and holders in progress.
I visualized this one in the crypt interior.
Top

i think 3 tiles is good ,lower and it would be in the players eyes

the only thing that could use some work is the color ...
imo i will blend with the floor (idk have not tested)..
maybe try matching the gate.. or making it gold (like the torch stands in the caves)...

nice job on it.

...if your up to it ,it would be great to have a wall mounted one as well

thx salmondine for the good work as always... 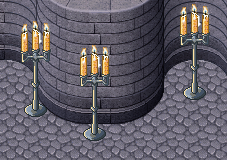 imo it looks good......i dose not hide in the floor/walls as much as i was thinking...

Looks nice. A full set of those would be a nice addition the the set.
MerlinX420
Computer games don't affect kids, I mean if Pac Man affected us as kids, we'd all be running around in darkened rooms, munching magic pills and listening to repetitive electronic music. Has anybody seen this princess I'm looking for?
Top

Very nice work salmondine. I have been meaning to reply to this one for a while but I havent gotten to the point where I need it yet. I made a few modification to the position and size so that it fits into tile sections. By doing this I could create the candelabra shown below with only 9 types of tiles. 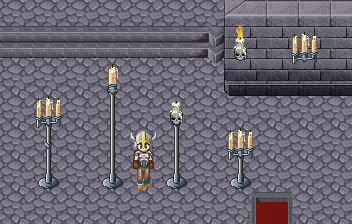 A few things: Don''t bother adding the candle flames, just the wicks. I add them to the map separately using a particle. I did not add the particle for the demo candles, but you can see one frame of it on the skull candle on the wall I had added previously.

PS: I just noticed from my demo pic that by centering the middle decor piece inside a tile, I off centered it when it gets tiled together with the short stemmed candle top and the long stemmed candle base. I can fix this in the next update I make after salmondine.

Here is the fringe tile set where I added the candelabra tiles, notice the colour scheme. 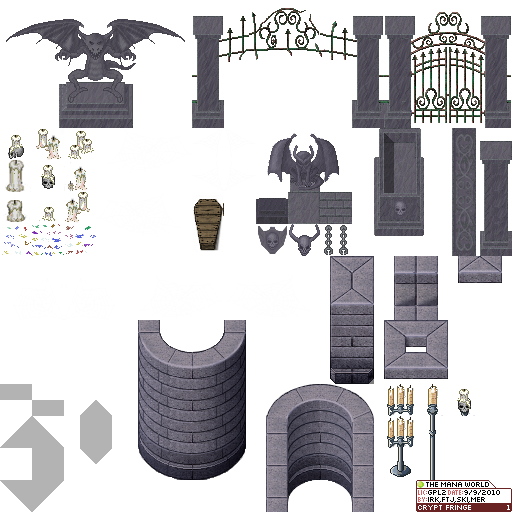 The best way to work with tile sets (as a pixel artist) is to use gimp and set Image->Configure Grid to 32x32 and then View->Show grid, View->Snap grid.


Merlin & others: great work on the tile set! I hope you don't mind me taking liberties and adding in stuff here and there. One important thing: when you originally put together the tile set, you used some brownish tiles from the graveyard (I think). I tried modifying the colour to match the crypt walls but I didn't quite get it right. Much more care needs to be taken to get it to match up properly. Please if anyone can pull this off IT WOULD BE AWESOME! I pushed the colour modified versions to the test client repo here
http://gitorious.org/~wombat/tmwdata/ca ... hics/tiles

PPS: sorry for the extra long post, I just had a lot to say about each part.
Top
Post Reply
158 posts