All development of pixel art, maps and other graphics.
Post Reply
22 posts

) Here is the finished version of the cat ears.

I wouldn't make them point straight up but rather away from the head in diagonal angles.

Wasn't someone working on a Fox Hat set or something. I am sure if we recolored the ears and got rid of the tail, it would look like a cat's ear.
Formerly Blacklord
Top

I added 45 degree rotation to it, I'm still decided on how to display side views.

A pencil is an extension the arm.
Top

Angeliex wrote:I added 45 degree rotation to it, I'm still decided on how to display side views.
ears.PNG

That's more like it. Now please do it without the blur-my-image-until-it-is-unrecognizable rotation algorithmn and repixel it by hand instead.
Please do not send me any inquiries regarding player accounts on TMW.

No posts for a couple of months, so it seemed fair game for someone else to have a go at this.
Currently I think the back is right, I'd appreciate comments about what's wrong with the front, and any suggestions at all about the side view.
The death pose is wrong, but I'll work on that later.
They should be dyeable.

I would suggest you to reduce the saturation of the inner parts. They should be more pink than purple. Unless this color is dyeable but I wouldn't know why you would want to dye the inner part.

It could also use a bit anti aliasing.
Please do not send me any inquiries regarding player accounts on TMW.

Crush, were you suggesting a bit more or a bit less anti-aliasing?

Having played about a bit, I've now got both cat ears and short rabbit ears.
Cats on the left, rabbits on the right, they both look the same from the side. 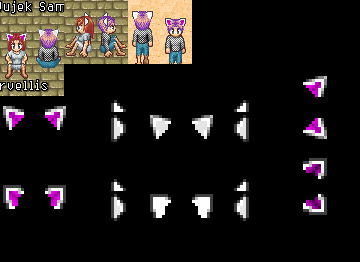 Cats above, rabbits below. Rabbits have an outline, cats don't, it seemed to work that way.
I've kept them dyeable for this revision, because I think it would be fun to have lots of different-coloured ears. But it's limiting, and I'm considering dropping that.
The short rabbit (but not cat) ears will darken when you die - happened while editing, and has been left in because I like it. Opinions please on whether that would be a nice feature.

I don't see much difference between the cat/rabbit ears. I think that either the cat or the rabbit ears should be used, but not both.
Top

Of the two, I prefer the cat ears. Even if they are the ones that need more work to get ready.
Development of the short-rabbit ears will cease.
Retired from TMW; incomplete projects looking for a dev:
Cave foliage (plants up the walls): http://forums.themanaworld.org/viewtopic.php?f=8&t=5659
Cave wetwalls (water down the walls): http://forums.themanaworld.org/viewtopic.php?f=8&t=5816
Top

octalot wrote:No posts for a couple of months, so it seemed fair game for someone else to have a go at this.

I'm starting to like this new fellow. You seem to know how one should use and handle colors in pixel art.

That aside, I think the rounder "rabbit" ears look better (more organic) and actually more catlike.

And yeah, subtle differentiation doesn't really work with our scale. Just pick the best, go with it, move on. This community is quite capable of dwelling on details for all eternity and people always have opinions. With opinions about details there is seldom right or wrong.

The side view is a difficult one. Perhaps to make it a bit wider and allow more detail without distorting the perspective too much?
This message used to be meaningful.
Top

Having spent a while with ideas swapping between the pointy and rounded versions, I'm moving to the rounder ones.
Again, this version is redyeable. If we go for not making it dyeable, I'll change the base image to the slightly darker colours labelled "redye" in this shot:

And here's what Tulimshar could look like if it is redyeable: 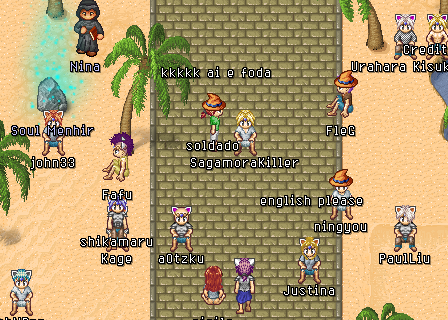 As with many hats, it doesn't work from the side with the mohawk.
They change shape in the death frame, because there isn't hair in front of them any more.

only show one ear on the side view. I know that is not the proper perspective but its the only way to make them work with the hair layer.
"Too much of a good thing is an awesome thing, but too much of an awesome thing is, um, really really dumb. And bad." Strong Bad
Top

Here are some ears cut out of my cat npc...

and here on a woman: