by Fother
Thank you. I've been dodging working on this all month, since I re-animated some of the tests so much that I got sick of it... but I'm returning to it soon to rework and scrap most of the bone components to be more flush to the player sprite, so I can at least kick out a skeleton that's roughly trim to the male player sprite to make variants (unarmed skeleton, armored skeleton, etc) easier for others to piece together. Origionally I was going to make the set dyeable, but I think I'll make it bone colored again since a colored skeleton is likely to have other variations to it's animation that would just make the need for it's dyeability a bit pointless.

by Fother
Okay, just to be clear, I'm creating a match-up sheet for all of the skeleton frames to the male player sprite so it'll be a lot easier to build variants from it (or else I'll never be able to get real momentum on this)... here's a side by side comparison for the down stand and walking frames. So that's 7/72 frames so far (give or take a few since the death frames will likely not match with the player sprite, as it'll be a pile of bones quickly falling apart).

Still have to technically go back and shade the leg movements of course.

by 5t3v3
Great improvement on the original version. Better then that, I'd say you're dead on!

by Fother
While testing the matchup spritesheet... I couldn't resist taking a snapshot... 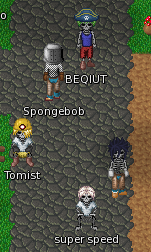 by mon
It can also be used for effects, like electrocution. Maybe if other monsters attack with static electricity or something. Or dead players being new zombie armies of a lynch while the actual player respawns.

by Fother
Before I actually forget to upload the darn thing... 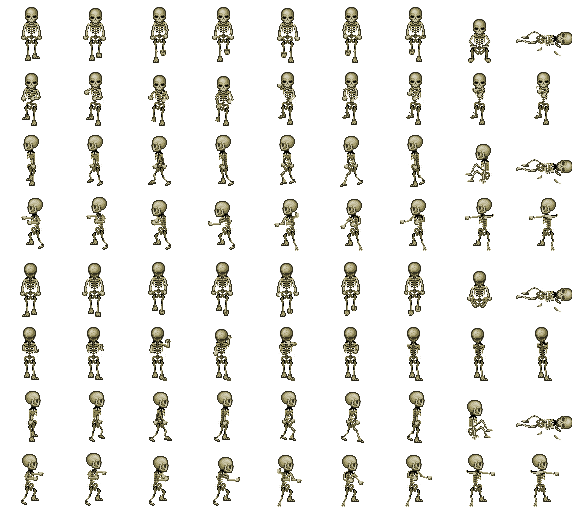 Will the special attack animation still be around somewhere? Would be nice when the skeleton is used as a monster.

by Savi
What would be funny, just before the skeleton dies is that it's head spins around 360 degrees then collapses and dies.

by meway
omg this is so cool i want to be a skeleton!!

by meway
btw i like the electric idea but this would be the greatist thing around halloween. also a nice monster to add with human like trates.

by otacke
I really fancy these skeletons!!!
All times are UTC+01:00
Page 3 of 3
Powered by phpBB® Forum Software © phpBB Limited
https://www.phpbb.com/