All development of pixel art, maps and other graphics.
Post Reply
5 posts • Page 1 of 1

I started the framework of a giant spider monster to post a joke on the forums earlier... but it'd be a shame to waste it... so I'm adding this to my unfinished projects (which I have plans on finishing them all of course

).
The original I put together was larger:

, but i ended up scalling it down to the following framework:

Here's a test of it with color (non shaded.. just a test).

The eyeballs wouldn't be a solid color once complete, and will appear very glassy and maybe a bit larger for the two fore and two side eyes.

There's not a whole lot of safe areas that large wide sprites can fit through without clipping issues... so this thing would work best as a deep cave boss or one that's in a boss's arena (such as an deep pit in the woods that's difficult to get to without certain requirements being met).
Last edited by Fother on 12 Jun 2009, 19:54, edited 1 time in total.
"Fother" Jarrett Huxley
Evil Pixel Artist 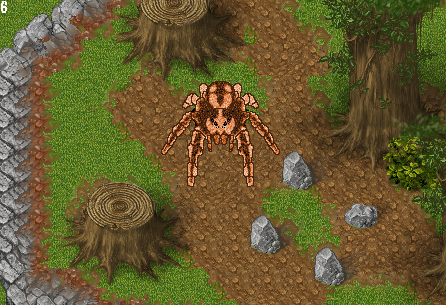 (I can dream cant I

Anyways its nice to see someone working on a larger monster

I can advise you to finish all the views first using outlines and then you can work on colors and shades, keep up the good job
Top

AxlTrozz wrote:I can advise you to finish all the views first using outlines and then you can work on colors and shades

Oh yes! This was one of my many distractions to help clear my mind before touching the skeleton sprite again (so I could forget what horrible ideas I had in it's approach and have fresh perspective for when I return to it and fix it)... I definitely don't want to get too ahead of myself once I work on this spider more... I'm going to draw all of the frames (including the attack and death animations) before I throw one shaded pixel at it!