All development of pixel art, maps and other graphics.
Post Reply
9 posts • Page 1 of 1

Through another topic I found this beautiful screenshot of a tileset that makes me totally envious:

I wish I was a good enough pixel artist to make TMW look like that.

Anyway, you might use it for ideas regarding new tilesets / new tiles. Obviously we can't rip tiles from it, but it might give some of you ideas.

I especially liked the way dense forests were made, although I think that swamp green canopy should be turned into solid leaves. That would be a great way to make a dense forest for the forested parts of TMW.
Top

sorry, but I think that tileset totally sucks.

1. All the objects look "soulless". everything is too perfect and clean. There are no scratches, cracks or dents anywhere. Even the ruin tiles look brand new.
2. Everything has either perfectly straight lines or perfect quarter-circles with 1-tile radius. This looks very unnatural, especially on the mountains. Mother Nature does not own a compass or a straightedge. Sure, the medium forces you to design things in straight angles, but a good pixel artist does his best to hide this. This artist didn't even try.
3. Pillow shading sins here and there
4. Inconsistent perspective
5. Boring textures
... I could rant on and on for hours.

The only plus-point I can find is that there is a lot of variety in the tileset.


...but I have to admit that the mapper did really good work with what he got.
Please do not send me any inquiries regarding player accounts on TMW.

thanks Crush now I feel stupid for liking the layout
Top

Yeah the mapper is a genius. A lot of the tile themselves are pretty bad, I'm just impressed with the way it all works together. What I like are the interaction and the mechanics of the tiles.

The variety and the way they can be put together makes it pretty fascinating and gives it a good overall feel, even if a few of the tiles are subpar.

Just thought this example might give you some ideas.

In a lot of old games all of we seem to like, there is a big amount of rushed not-so-good tiles which were not retouched since they were already pushed from artists to mappers to keep the release schedule of the game.

Fortunately we have a lot of time on our hands. Until our Sun expands and fries us, as far as I can see (or then TMW will take off from this mudball, you never know).
This message used to be meaningful.
Top

Hmm is it only me that gets dizzy from staring at that picture like it has some serious perspective mix. Like it was done by MC Esher: 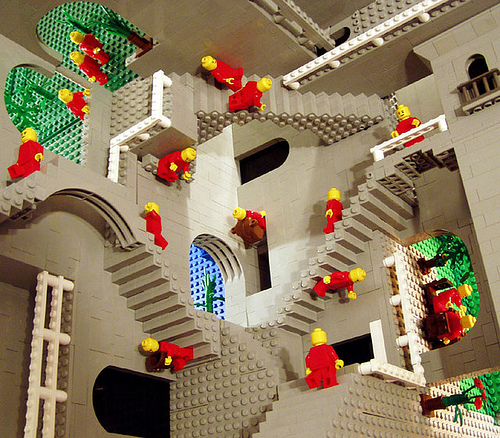 As to that Lego construction, I have seen it before and it is Escher. Look:

I think it's totally brilliant, and I would love to see a room like this in TMW.

Gouki wrote:Are RPGmakerXP tilesets opensource??? because the people from the pic, and some of the plants are definatly from rpgmakerxp. maybe everything, but that must be some tileset i dont know.

A few tiles are indeed based on RPG Maker XP, however most of them are not. Its drawn by the Inquisitor. The license is not opensource but something like this:

Again, I must stress that this tileset is also to be exclusive to RPG Palace, so I kindly ask you not to host this elsewhere. If you feel you must, then IÃƒÂ¢Ã¢â€šÂ¬Ã¢â€žÂ¢d prefer it if you linked directly to this page. However, donÃƒÂ¢Ã¢â€šÂ¬Ã¢â€žÂ¢t feel a need to credit me in your projects if you decide to use this. The fact that you are using it (if you are) is reward enough. Thanks.

So obviously we can't/won't use these exact tiles in game. I think that a few of the ideas from the tileset would be nice if they were implemented in TMW. I was looking at some of the outside variety, specifically the way the trees are rendered, which I personally think is much better than the trees we currently have in game.
Top
Post Reply
9 posts • Page 1 of 1