Does anyone have a suggestion how to try out animations in the GIMP? Or some other simple program? (I'm using Debian here).

by baseballboy
wow! that is awesome! i could be like a boss kinda like the jacko except for snow town!

I agree, it's awesome, but needs to be less shoulder heavy... looks like a bad Frankenstein monster at the top, like a 30's horror flick, but the fur looks awesome and the face/skin great.

hkurn wrote:Does anyone have a suggestion how to try out animations in the GIMP?

If you save you're image as .gif there's an option to save it as animation. Every layer stands for a frame.

What did you build your design from? Is the yeti is based on a sprite from another game?

by hkurn
Thanks for the comments! I'll definitely change the posture for the front view.


John P wrote:What did you build your design from?

I looked at these pictures before, to know what a real yeti looks like:

and I took the flurry as reference for how to paint fur.
other than that, it's all based on my brain I guess.

Note that this one includes a hint as to how produce a good sound effect for it.

by hkurn
This is my new posture for the front view. Will there be a problem due to the arms overlapping the player standing next to the yeti? 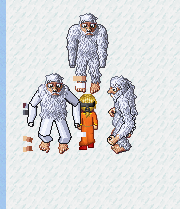 btw.. is it possible to use the first front posture for an 'inactive' yeti? and it only changes to the second posture when it sees a player?

another question: is it possible to animate standing monsters or do the monsters never stand still?

by Jaxad0127
You can do idle animations.

by hkurn
ok... this is the aggressive mode front yeti. hmmm.. I just see that all the contrast/dark shadow in the legs' fur is gone.. I think I'll fix that. other than that, if nobody has sth to say I would say the front posture is finished. What do you think?
The attachment yeti-mockup2.png is no longer available
... with darker shadows:

by John P
love the coloration and the hair, don't so much like either posture. I agree he is too stiff 'Frankenstein' looking. I can't tell if he is supposed to be standing at attention or if his hands are dipping behind him. From the front/aggresive stance it looks like he is sitting in an invisible chair. I mean, it seems as though I can imagine him at any perspective from 45 all the way to laying down. I don't know why and I don't have any helpful suggestions because I am not an artist at all, but this is what I see.

I would like to see this work get some footing though because I really like the face, hair, and bare feet.

regarding lying on the floor: is this better/different?
for the legs: are the legs in the background (circled) better?

(what i intend is that the front/aggressive stance should be like the left stance, so bent knees and ellbows)

by bcs86
We view the game world from overhead. A flat standing pose might seem like the sprite is laying on the ground. It needs to look much more aggressive. Maybe this could help...
yeti-temp.png
(The above image attachment will disappear if I ever have to free up my attachment quota.)

by Crush
The pose by bcs86 is really great. Exactly what I had in mind. Hkurn, do you think you could make it like that?
All times are UTC+01:00
Page 1 of 3