Got something on your mind about the project? This is the correct place for that.
Forum rules
This forum is for feature requests, content changes additions, anything not a Bug in the software.
Please report all bugs on the Support Forums
Post Reply
36 posts

Okay, so I finally started working on this sometime this morning as a break between putting other stuff together for work later today. I'm going to try to make as much as I can so it can be picked through properly. I almost have zombie and wandering soul sprites finished (though the wandering souls are more or less semi transparent balls of blue fire that would probally look a lot better as particles, but I'll post this stuff in the next week or so.) Where there's zombies, surely necromancers and liches couldn't be to far off.
"Fother" Jarrett Huxley
Evil Pixel Artist

What about using the GPL undead creatures from Battle of Wesnoth?

In fact there are a lot of sprites and animations that could be used from Wesnoth, it's all GPL
http://www.wesnoth.org/units/trunk/C/mainline.html
Top

The developers prefer using original art.
Another problem is that they would have to be resized since they are to small compared to the playersprite, which would mess up the pixels.
Plus, wesnoth characters don't have walking animations, only attack animations.
In game characters: "5t3v3" and "L "
Top

5t3v3 wrote:The developers prefer using original art.
Another problem is that they would have to be resized since they are to small compared to the playersprite, which would mess up the pixels.
Plus, wesnoth characters don't have walking animations, only attack animations.

Not all of the Wesnoth characters have it, but some of them do have walking animation (I'm not sure but I believe skeletons have). Also, if a walking animation is created for a Wesnoth monster in tmw, it might be contributed back to Wesnoth and it could be a double win.

The sprites can be resized, filtered, recolored or tweaked. I was just commenting about using some of them as a base, in the same spirit of Twilight's suggestion (in fact, Secret of Mana sprites are even smaller than this ones). It was just a suggestion. In fact, the main burden in my opinion is that in Wesnoth the characters are never heading north. For this, sprites for the character would have to be created from scratch... maybe some sprites would have as much work as redoing everything from scratch.. but it might still be nice using some of them for inspiration or base, Wesnoth sprites are really nice.

Maybe for tiles, Wesnoth artwork could be more useful. There are tiles in Wesnoth that could fit the cemetery theme nicely.
Top

Wesnoths tiles are 1. hexogonal and 2. have a scale which is a whole magnitude larger.

As much as I like Wesnoth for being one of the few ambitioned, true free software games besides us (free software and free content) I unfortunately don't see a large room for cooperation in content development.
Please do not send me any inquiries regarding player accounts on TMW.

What we have so far which could be used for it:

I know it doesn't make too much sense to work on undead if there's not an environment for them yet... but I've also been working on a lich...

Going on the suggestion posted by Luneenia, from 2 1/2 years ago that the graveyard use above ground graves, like New Orleans, here's what I'm playing around with so far: 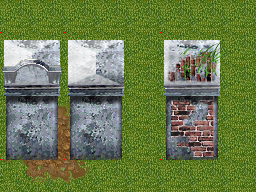 I've been trying to touch this more, but have been to sick to think straight over the last week. I still have to create tombs that can be tiled wider or taller to function as mausoleum burial vaults.
"Fother" Jarrett Huxley
Evil Pixel Artist

Sorry, but these tiles do not fit the style of the rest of the game at all. Try to go for a less photo-realistic texture.
Please do not send me any inquiries regarding player accounts on TMW.

Oh CemetEry thread, I haven't forgotten about you

Gotta finish that skeleton sometime though

What will be the goal of this monster ?

What will be the goal of this monster ?

The wondering soul was a quick test I did when I was trying to come up with some quick ideas on ghosts (this one using Modanung's male sprite modded into a simple ghost using the basic shape Len suggested.) Interestingly enough, this wound up in my sprite graveyard [the land of unfinished stuff on my notebook]. I had planned to use this variation on the Wondering Soul (in this case the Perished Miner) for a quest in the mines.
"Fother" Jarrett Huxley
Evil Pixel Artist

where the ghost is floating, he kind of looks like he is hanging on to the edge of a deep hole trying to get out
Top
Post Reply
36 posts