A section to post about events or discuss and organise new events.

DISCLAIMER: This is an inter-server event. Rewards may be claimed on both The Mana World as Moubootaur Legends. Read the specific section for more details. Also, the event may change without prior warning at any time, if deemed necessary by staff.

After Halloween, Gak has been feeling very depressed. Santa, one of the Kaizei Sages, noticing one of the many leftover anomalies the Doomsday caused, decided maybe he could help Gak to have a happy Christmas. If only Santa had some adventurers to help... About Test Server: On December 10th, TMW player data will be copied to test server, and the debug facilities from test server will be temporarily disabled. Existing characters in test server will be deleted. Moubootaur Legends Players whom do not have a TMW account, may request ML staff, until December 10th, to create one for them similar to their ML stats.

About Event Area: The event area will consist on special maps, which can be accessed by talking to Santa. The zone is instanced by party, and then by char. If the dungeon is too difficult to you, form a party and raid it together! However, only one character may progress the story at a time.

About Grinding: Experience acquired will carry over to TMW Legacy (and ML), however, items looted and money gained/spent will not (under staff discretion). Event difficulty will scale in a "weird", but predictable, way. You're free to use the scaling algorithm weakness to make it easier or harder to your liking.

About Magic: The server is running under Evol2. Therefore, we do not advise the use of runners, as they may not be able to withstand the lag.

The rewards may include: * Rewards subject to change without notice. Additional rewards outside this list may be available on the after-stories of the event. You will not be able to obtain all the rewards on this list (pick one, maybe two). Moubootaur Legends Rewards:

The rewards may include: * Rewards subject to change without notice. Cumulative, you will be able to obtain all of the listed rewards.

Can we bring a merry Christmas to a lonely skeleton like Gak? Hohoho! Let the Christmas spirit inspire you, and prove that happiness is for everyone indeed! Hohoho!

Event has begun, talk to Santa Helper in Nivalis Square of the Test Server (port 6902) to begin. 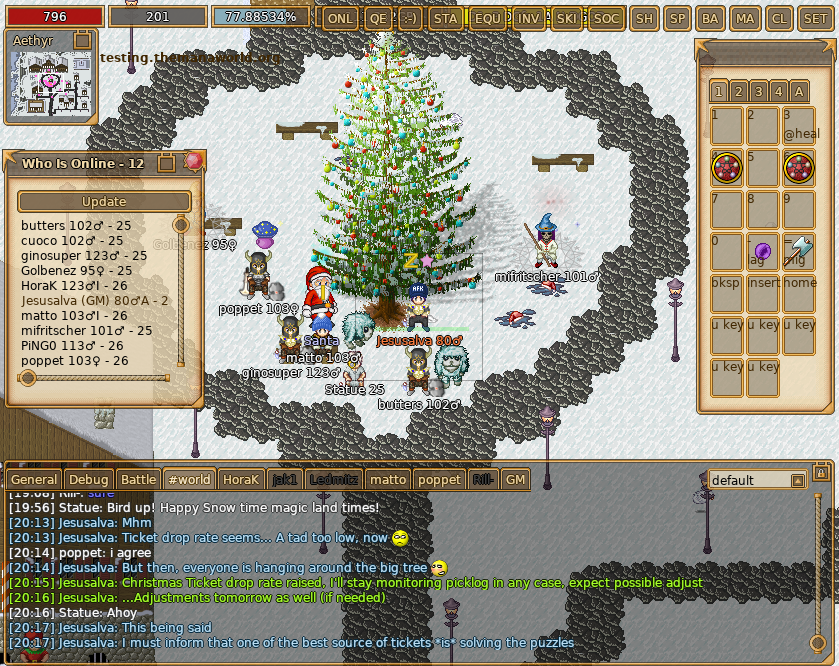 There is a test server??? Where?
Top

Few known issues to chew on if devs got time to sort that out, even while event going... since intent been to give tech a try, let's use it to iron few things out maybe?
Sorted out.
1.1) Btw GM cmd @help looked rather useless. Any better @help? Fortunately @killmonster2 still did the trick.
2) Candles hints get eventually real hard to decode. Even if I like that kind of thing, I once had to reset sequence and retry. Some players apparently get frustrated faster and give up on early phase. Its more intrusive fix, in worst case let it be.
3) I see ton of NPCs with female signs. E.g. Constable, Inspector or Richard in hurns. I'm pretty sure they're not female. WTF, srsly?
4) Magic... sorta sub-par so far. Most notably...
4.1) Spawns are TOTALLY useless. Pointless waste of items on weaklings that can't kill anything. - jande added.
Fixed.
4.3) Heal exists but for some reason got no FX, very confusing like that.
4.4) plugh sorta ... different and typical TMW setup didn't worked out "as is", had to go fasten a lot to reduce weight. As skill is passive, cocoons no longer got one of major sinks either.
4.5) Transmutation skills behave really strange. Sometimes they work. Somethimes they dont. Its very puzzling intermittent bug.
4.6) Transmutation skills definitely OP. Whaaaaaat, 1200 piles of powder from one ash? Ladies and gentelmens, TMW developers proudly present Dream Bug Event. Feel free to exploit really cool bug while you can. Well, its test server anyway. So guess its rare case where nobody would object too much.
4.7) Frillyar is FAIL. It fails most of time with obscure "equip ammo first" (?!). If it works, it sometimes drop few arrows if one keeps pressing shortcut, but its really useless like that.
4.

Manpahil wants all herbs, bug leg + slime and makes 10 stones at once. Maybe that's okay but not properly described or something.
IIRC idea been to try to rework magic, but at least quick rebalancing to make event more fun wouldn't hurt if it doable with minimum fallout.
5) Still sometimes backfires but workarounds added, etc and it should be at least somewhat usable.

Greetings, young heroes and young heroines!
The event walkthrough is now available. Use it if you're desesperate!
Some stuff change every time you attempt to do the quest, so perhaps don't rely too much on it...? Ho! Ho! Ho!

A Merry Christmas to all!
Top

Numa wrote: ↑03 Dec 2021, 19:08Experience acquired will carry over to TMW Legacy (and ML), however, items looted and money gained/spent will not (under staff discretion).

As there are ways to convert items & money into experience, like diseased hearts, iron/conc pots, so shouldn't it be that nothing is carried over (not even experience) except the event rewards? Or everything can be carried over, but then there is the ash -> 1200 powder bug.
Top

Numa wrote: ↑03 Dec 2021, 19:08Experience acquired will carry over to TMW Legacy (and ML), however, items looted and money gained/spent will not (under staff discretion).

As there are ways to convert items & money into experience, like diseased hearts, iron/conc pots, so shouldn't it be that nothing is carried over (not even experience) except the event rewards? Or everything can be carried over, but then there is the ash -> 1200 powder bug.

Carrying everything over is both impossible, undesirable, as well as offer way more cheats.

The amount of experience you can leech this way isn't outstanding, you could get way more experience by taking advantage of the "you can sell all your assets" to acquire consumables and engage in daring battles.

But that's good, it stimulate gameplay; It's also Christmas, so there's no need to be greedy with a couple hundred thousand exp points, is there?

(Besides, experience table after level 120~ish is pretty much insane; It takes either a polish warmachine or little opportunities like these, in the end ^^)

Off topic: I added some "buttons" near the candle barriers, if the barriers get stuck, use them to move past the barrier. Not the prettiest workaround, and Hello=) is working on a more permanent fix, but this should do the trick.
Jesusalva (aka. Jesusaves)
Top

However, you'll have to find the entrance to the expansion area with your friends.

1) Its experimental technology. Guess its like 1st "serious" try what this thing can do at all, at least in context of TMW.
2) Can you be more specific on "lag" thing? What/where exactly, how it appears, etc?

3) If you mean some client stutter/jumps on imperfect connection and something like that, try something like
(this should be done when on test server - some settings are per-server)

4) On really long walk it still MAY desync and jump/resync position anyway. Its sorta known thing, but...

NB: most clients don't have THAT big difference in this regard. So e.g. 4144's latest shouldn't have big diffs vs selffork, at most selffork attempted strange workaround of 4) but it wasn't glaring success and looked a bit strange TBH. But other than that selffork changes look relatively harmless in networked aspects. I use laterst 4144-flavor version, but I've built it myself.
Top

Now i changed the client settings with test server running, as per what Hello=) you've suggested to me but still the lag, even after client restart.

The lag is showing up in many ways. It's most affecting me when during fight i move away from monsters (i'm an archer) but then i get pulled back to them. The lag makes my character keep jumping here and there when trying manoeuvring in crowd of monsters.

If the test server is geographically located in a different place than main server then can the lag be because of the location? Since main server is working fine for me. I'm in India.
Top

That's a terrible idea, they use different engines so the defaults are different as well.

You're better with the default settings than merely copy-pasting tmwAthena settings.


Ecuador wrote: ↑20 Dec 2021, 09:38 The lag is showing up in many ways. It's most affecting me when during fight i move away from monsters (i'm an archer) but then i get pulled back to them. The lag makes my character keep jumping here and there when trying manoeuvring in crowd of monsters.

That is actually the combat resync; There's some stun effect when you're busy firing an arrow or getting slashed. It is present on both engines, always existed as far as I'm aware, but tmwa doesn't cares if ManaPlus ignores that effect, while Evol2 thinks that's cheating.

But this effect is sharper on Evol2 servers than tmwa, way sharper than it should, and it does count as a bug in my book. The controls aren't smooth yet, I'll say we're "working on it" but that only means we're aware of it, we don't have that many coders around to help. Volunteers welcome and appreciated.

Meanwhile, Hello=) proposed several mitigations, although I would use the special diagonal speed. There may be some others, and you can also stop attacking to recover distance, but don't expect it to be as smooth as tmwa; we're still ironing that out.

For the record, you could go to ManaPlus 1.8.12.x to have M+ ignore this effect, but the server will NOT agree with you - and before you realize, you'll be taking damage without anything nearby, because your apparent position is a dozen tiles wrong.

So the push is a bug we introduced ourselves to mitigate a worse bug, but it did not behave smoothly, so I say it is still a bug.
Jesusalva (aka. Jesusaves)
Top


On December 23rd, the Nuclear Winter difficulty mode will become available.
Make sure Hello=) is online around that time to nuke them after the inevitable fail and ensuing doom...

The lag seems to happen specifically when moving your character. There is no lag when attacking unless movement is involved.
Team swampers
Top
Post Reply
21 posts