Where game and project announcements are made.
Locked
6 posts • Page 1 of 1

This is a throwback to Evol's old news posts. Great for community engagement and stupidly abandoned in 2016. But this is 2019 and I will write a news post if I want to, dammit.

Hello to everyone, regardless of gender or race. Yes, I am addressing the shy Tritans among us! Oh, your dog might also interest on this.

So, the last edition of this newspaper was in March 1st.

It was about 45 days ago, so lets do another new post!

So, here is the current progress report for rEvolt server.

Well, so I would love to bore everyone to death, telling about how many placeholders we've added this past period.
From adding a hideout on Artis (where? it is a secret of course) (to -err, fight against the Legion), to several bugfixes and bringing Wyara back... Adding minimaps to most maps while still keeping Rossy's caves a secret, improving several minor things and add some skills (because, seriously, we are the MANA world. A mana world without magic makes no sense, right?).

But thing is, I can't.
I know, many missed Mona's dad rescue operation. I know, many missed the incredible desync which brought 4144 to release ManaPlus 1.9.3.23. Throwing stuff in sewers and Peter quest redesign, and making sandwiches...
....But I don't have time for that, because in case you just said "Neat, there are progress bars on the picture", there is also due dates.

Spoiler:
Fan Art: Angry TMW Developers going after Reid, because she took all the Nutella for herself and we need it to slay evil beasts:

I'm making this announcement to tell you that our first development milestone for the new server's first release, titled The Mana World: rEvolt, is now 100% completed. The initial deadline was set at 31/05/19 but we managed to finish one month ahead of schedule!

The milestone was called Artis Sewer and included all content relating to the underground maps under the city of Artis as well as some other bits of content that we wanted to be out at the same time. The next milestone, Artis Legion, currently sits at 75% completion with a deadline of 30/06/19, but given how quickly things have been moving I would say we're well ahead of schedule for this one as well!

The third and final milestone, Hurnscald, encompasses the biggest part of the release: the town of Hurnscald and the surrounding woodland region of Argaes. Its deadline represents an approximate deadline for the entire release and is currently set at 06/09/19.

I want to say thank you to the people who have worked the most and the hardest in recent weeks to get us this far: Micksha and Jesusalva are undeniably the reason why we're moving so quickly and I'm very grateful for their amazing work. Toams has been working on fundamental things for the Artis Legion milestone and we have him to thank for this next milestone doing as well as the previous. 4144 is, as always, the beating heart of TMW development without which we couldn't be doing any of this. There's many other people who make all of this possible, but this isn't my graduation speech so I'll cut it short and just give everyone a big thank you for sticking with this 15 year old project that continues to surprise me with how far it has come. I promise the next milestone announcement won't be as soppy, but this is the first one so I think it's fitting.

Hello everybody! As we're getting closer to deadline, we have even less time to make news, but why not doing news when there are some news?
I'll be dividing these news in three sections: TMWC/TMWT* Bulletin, Legacy Server News, and rEvolt news, which should cover... Pretty much everything happening, not only in development.

So, time for action!

TMWT BULLETIN
In the past weeks, a few decisions were approved by The Mana World Team (TMWC/TMWT). We'll not be saying about too old ones like the rules change, as most of you are already aware.

First, we made contributor shirt request proccess more simple, with more clear rules of what counts and what doesn't.
Hopefully, contributors will face less problems/bureaucracy in getting their c-shirt now!

And also, in the begin of this month, Jesusalva was internally voted as a server admin. That's me. Just for the record, please do not confuse admins with GMs or Event Coordinators; If you are being harassed while Prsm is offline and I'm online I'll obligue, but the final decision is still up to Prsm. (And to TMWT as a whole).

LEGACY SERVER NEWS
So, now that you all know what TMWC have been doing, we have some notices about the current main server!

As you might be aware, there was a "bug" which had funny side effects.

One of the side effects was that the level cap was raised from 99 to 135. Originally we planned to revert that, but we then decided it would be better if the community decided instead.

And the results are that, currently, keeping the new level cap of 135 is with overwhelming advantage. I guess it came to stay, after all!

Also, for next week (Oct 7th onwards), there will be a new Halloween Boss, called Tormenta. Said boss will give large amounts of experience to whoever defeats, and may drop rare hats! (She spawns hourly, whenever minutes reach zero. There can't be two Tormentas at same time.)

Tormenta came directly from the Abyss, and we're still not sure of their relation with Valia and Luvia. She is still bound with the Abyss, but Halloween is creepy and creepy things happen. She will keep returning during the whole event.

Conspiracy Theory:
Spoiler:
Conspiracy Theory say that Tormenta might be Valia's and Luvia's mother; And because she was too dangerous she was purged to the Abyss by her daughters. The conspiracionists also say that her powers are still not at their fullest. But then, do you believe conspiracionists?
The drops and spawn point are as follow:
Spoiler:
Tormenta spawns at Hurnscald Farms (ask any Teleporter), in the herb farming spot northeast of Hurnscald. Note: Witch Hat, even if it looks cool, will not be dropped.
REVOLT SERVER NEWS
Of course, main development still comes to the new server, which hopefully will be made available after Halloween, but we depend on contributions to meet deadlines. If nobody come to help us, we might need to extend it again, and we really don't want that, because we've been postponing this since... Halloween 2016? That was THREE YEARS AGO! We're as agonized to release it as we hope you players are to playing it.

We have pushed Omatt's Training Room, a place where you can train your fighting skill against dummies. We're now developing Trozz's Training Room, which instead of dummies that won't fight back, you'll be facing Legion members!

Oh, the blacksmith also stocked up some arrows.

But enough of Artis, what's going on Hurnscald?
We're mapping the Merchant's House, who'll help you to don't get lost, because you aren't disembarking directly at Hurnscald.

4144 (aka. Andrei) also become a NPC (wasn't him one already? Nevermind...) and took his rightful spot in Hurnscald.

Also, we have updated our translations in case you want to contribute somehow but doesn't knows how!

By last, for potential contributors, I'm considering in giving a "public class" in basic quest scripting. Interested? Please enter in contact with me (either PM me ingame, in the forums, Discord, or send a message in IRC); Preferably for this Saturday but as I know everybody is busy including me, we might need to discuss precise time and date.

I don't plan in teaching individuals in coding because that wears me off quickier than teaching a small group; But we'll see how it turns out as we all have time constraints.

And that's everything... for now.

Re: The Mana News

Just a quick announcement to say that we have renewed the evolonline.org domain for the benefit of CRC (who hosts their own website through the domain) and all the Evol content that is still hosted there as well.

The renewal was for 1 year and cost $17.78 USD. We are planning to potentially transfer everything on that domain to themanaworld.org or themanaworld.net (which we both own already) over the next year.

Re: The Mana News

It has been quite a while since last news, but while we do chat about what's up ingame, those whom doesn't login or doesn't talk to us ingame might not be quite on-par with our latest mana news.

So, again, I'll be dividing in three sections to try to cover pretty much everything.

TMWT BULLETIN
HoraK has been named a Developer and Big Crunch has been re-elected as a Game Master. Congratulations! As usual, we conduct GM reelections internally to make it quicker. If you wish to become a Game Master, you should get someone to Nominate you on the proper forum section!

If you have been following the team list, you may notice some names are gone. We periodically revise who have access to what and if they still need access to it, specially those with access to personal data. That's why names sometimes disappear from the list and why we have GM reelections.

REVOLT SERVER NEWS
The Mana World Development Team has officially put TMW rEvolt on hold for an undetermined amount of time. It's not gone, you can still access it on the test server after selecting the correct update server.

However, it is on hold, so it no longer has any ETA and development on it is currently frozen. The merge calendar has also been suspended.

LEGACY SERVER NEWS
The reason why we put rEvolt on hold, was that we decided to migrate TMW Legacy engine from tmwAthena to Evol2 as well.

Migrating the engine will allow development on the server to resume. Player data will be retained. This is a technical procedure; Game mechanics, items, art, monsters, et cetera are largely unchanged from what you know in TMW Legacy.

There are, however, a few exceptions; Both for technical reasons as for convenience. The full list is available at our wiki, and is subject to change. But here are some spotlights:

While we have no official ETA, we need your help testing and reporting any inconsistencies and/or bugs you find. Once we migrate your data from TMW Legacy (running under tmwAthena) to TMW Evolved (running under Evol2/Hercules), there will be no coming back!

And once again, I must repeat: TMW Evolved is supposed to be TMW Legacy running in a different engine. If you see something different on Evolved than it was on Legacy, and it was not listed on the wiki, it likely is a bug and should be reported.

A full list of known bugs can be found at: https://gitlab.com/groups/themanaworld/ ... ate=opened 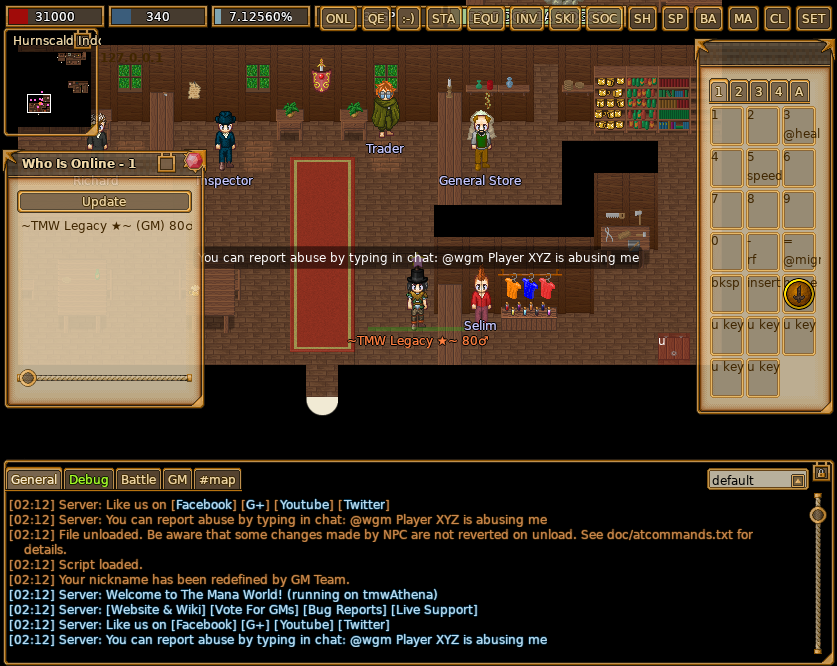