I just updated the testserver with a new quest series.
You can use

to get to the map with the new content. Most of the NPCs don't have their final sprite yet, so don't be confused by how they look.
There's a special debug NPC that can reset your quest state and for the subquest where monster spawns are involved, I'd like you also to test in a team to see if the scripts work ok in that case too.

Is to get the Dagger the last thing?

Why there is no limit in the bookpages ou can give to the worker? Is it luck to get much pages or not much?

Thanks for this quest

ZdlN
"What's a philosopher? A man who opposes nature against law, reason against custom, his consciousness against public opinion, and its judgment against error."
Sébastien-Roch Nicolas de Chamfort (6 avril 1740-13 avril 1794)

both translated by the player Nard
Top

I just started on the quest and so far I like the fact that it's an extended quest that requires actual time on the game. The collecting items along with the investigating seems fun so far.
What level should this quest be for? I ask cause I was testing it with a level 45 and one NPC said I wasn't strong enough yet.
"The road to hell is paved with good intentions."
Top

There are three different subquests that can be done independently.

ZdlN wrote:Iteresting Quest - but the ground floor makes a little bit crazy while running between the bookshelves

I'll try if it looks better to place some more carpet on the map.

ZdlN wrote:Why there is no limit in the bookpages ou can give to the worker? Is it luck to get much pages or not much?

There's a limit, it's just luck if the page you give them is a new one or a page they already have. Only the new ones are counted.


jessyb03 wrote:What level should this quest be for? I ask cause I was testing it with a level 45 and one NPC said I wasn't strong enough yet.

The minimum level is set to 60 at the moment, since some of the required items are drops from strong monsters and the amount is rather high. But this is also something I'd like to get feedback on, if you think the amount of items or the minimum level is too high/low, you can give suggestions about how to change it and why.

Hi,
very interesting subject for this quest, background story and unity of it.
Adding broken books, book pages might reflect the story better.
I couldn't find any slimes, just 1 that i killed before starting it, not sure
i understood this part of the quest right.
The cocoons are quite easy to find and at level 60 you could ask for more,
yeti claws i would say the opposite.
Great work bringing into the game more "cultural" content.
Thank you.
http://themanaworld.net/ a well known host for real players.
Top

Whistler wrote: I couldn't find any slimes, just 1 that i killed before starting it, not sure
i understood this part of the quest right.
The cocoons are quite easy to find and at level 60 you could ask for more,
yeti claws i would say the opposite.

There are 7 spots where slimes can spawn in the right part of the librabry, after you talked to Pyry.

I restarted the testserver with some changes:
- The probability of getting blown up when stepping on a slime spawn point is lower now.
- I reduced the amount of Yeti Claws needed a bit.
- Added the item 'Ice Gladius' made by ChefChelios as reward for one subquest.
- Also I gave stats to the Grimoire.

Let me know what you think about the new items.

Did anybody try to fight the slimes in a group yet? I'd like feedback on that, since my possibilities to test that myself were limited.
Top

to get to the start of the first one, all others can be reached from that one.
Top

Well, honestly there is to much @alive and such commands. I like the items you get. It was good quest. Just to much running around. If you try the quest do it as same stats level and armor as your character on main server to see if it will be hard for you when it comes out. I was level 76 when i did it with 87 dexterity and 95 agility and it was easy. I was very confused at start but i tried talk to other NPC's. So go try it out as your level, stats, and armor

The part where to give dyes is only accessible if you are under the minimum level. I suppose this patch should be applied:

v0id wrote: The part where to give dyes is only accessible if you are under the minimum level. I suppose this patch should be applied:

Thanks for spotting this! I corrected it locally and will update the testserver soon, but I'm waiting on some other changes I want to apply the same time.

It is better now with less slimes and the new patch. Doran, Frost, and I tried it as a group also and it was easier. So if you get in a group it will be easier.

I just updated the testserver with the new graphics for the NPCs, made by Nami and salmondine.

I changed some of the helpers to being female, and I think I catched all occurences of the names as well as 'he', 'his' and such things in the dialogue, but in case I missed something, that'd be a good thing to look out for when testing.
Top

Okay, I guess I'm through with the quest.
I killed the slimes in the library, gave the librarians all the material to repair their books and finished the investigation, I guess those are the three subquests, right?
There's just two things which leave me wondering if I'm really finished:
- Mirjiami is still unhappily looking for cleaning gear.
- One White Slime dropped a Silver Mirror, quite an unusuable item, it's not used in the quest, is it?

My opinion on the quest:
Mostly, I love it, thanks a lot for this great content! While I think the quest might be a bit difficult for a lvl 60 player, especially when playing solo, we want a challenge, don't we? And it's really a good idea to have so many different items needed but none of them in vast numbers, so people will spend a lot of time gathering items, but since it's different monsters to kill, nobody'll get bored easily, and we got quite some spots now where you can meet ONE and just ONE Yeti, so getting the claws is also possible for solo players of a relatively low level.
Also, I love the mixture of the three subquests, one requiring item gathering, one killing, one talking and investigating.
I personally don't like the idea of being randomly killed without having any influence on it (running, healing items, fighting), but since it doesn't happen too often (just three times to me throughout the whole slime killing action) I guess I can live (or die

One thing which was a bit irritating at first was the fact that the "mini-slimes" trying to protect their nest hit you, deduct hit points, but those hit points are not indicated in the usual way (a red number flying above your head...). So at first I was a bit shocked when my health had gone down without me noticing, but I guess players can get used to this.

Music will be added, right? Felt a bit like in the bandit's cave there for a while.

So far for the content, just leave it as it is now, it's a great quest. I didn't encounter any real bugs, but a few typos, which I will talk about in separate posts due to the limitation of uploads per post.

In the picture showing Mirijami, I guess it's "THESE terrible slimes", since a plural is being referred to. 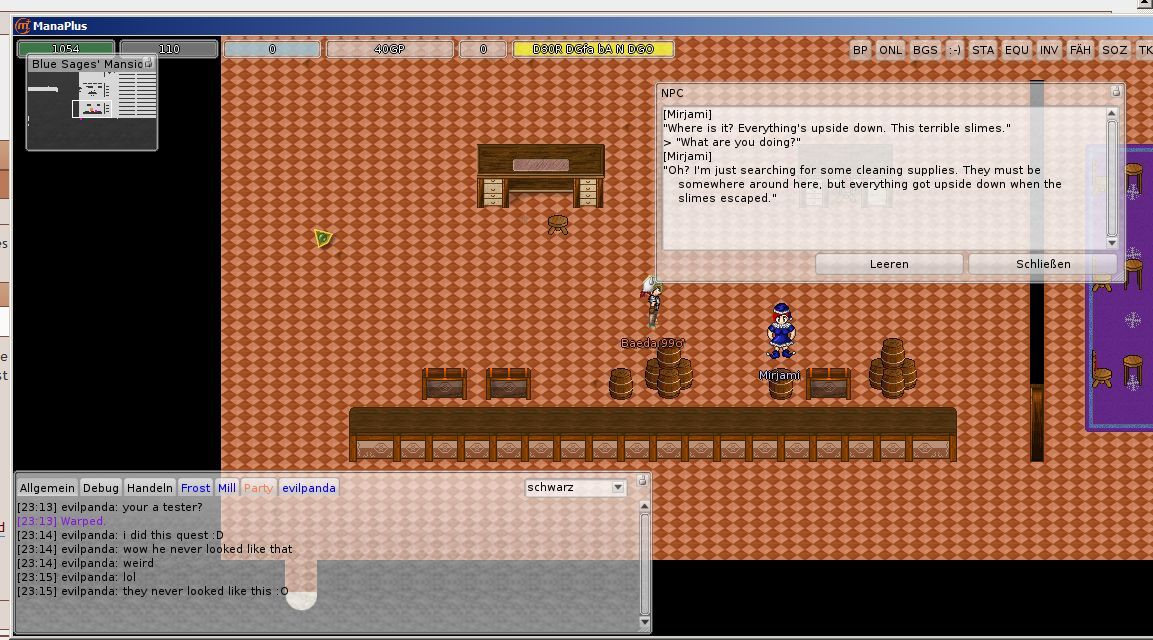