Content and general development discussion, including maps, quests, and server code from the development team.
Post Reply
4 posts • Page 1 of 1

This is inspired by Crush's plans for Argeas http://forums.themanaworld.org/viewtopi ... 50&start=0 ; the top-right section is map 4 on the plan in that topic.
It's not yet finished, but I'm running out of free time at the moment, and offer it to assist anyone wishing to finish the map.

It's ported from a design for Ae; the difference is that some experimental building tilesets have been removed (could do with some tents for the loggers) , and the tree alignment noted in http://forums.themanaworld.org/viewtopi ... 959#p49959 ).

I've been making a new woodland map with an easily-defended island in a river; it's just an early edit, but now's the right time to show off the concept and take suggestions about changes.

On the island there's a logging camp setting up, which could grow in to being a small town or fortress later. Currently it's just a camp that the pioneers can defend from monsters; but they'll ask for help from the players to reduce the monster population.

The loggers say that trees around here give better wood than the (non-monster) ones around Hurnscald.

Opening new forest maps: Once the logging camp is established, the foreman will say that the loggers will generally cut down trees near the island; but as the adventures have done them a favour, they'll help clear paths through the forest. They'll also have structures that will give a better view of the surrounding lands; and can have an NPC who comments on areas that will open up soon.

Map size: this is Aethyra new-world size (200x200). The guidelines on the map show the 20-tile border; and the lines if it were split in to two 150x120 tile maps (which would lose the leftmost 50 tiles).
(The TMXCopy utility can be used to do this split, but for editing it's easier to keep it as one map.)

A new nature witch (or maybe Sagatha moves) wants to stop the logging camp being built. The area is covered by two 150x120 maps; at the map-split the witch has summoned a wall of trees (not yet added to the map), with only a small gap where the loggers have felled them. These would be whichever of the new trees looks like it would give the least-useful wood (twisted branches would be good here). 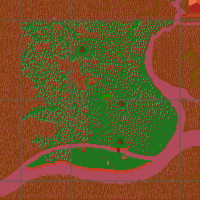 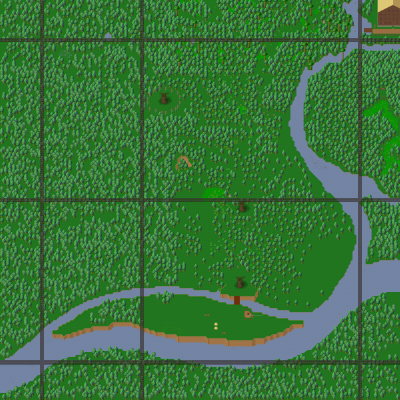 The map lacks some love for detail. There are a lot of areas where multiple instances of the same object are grouped together although there would be alternative tiles and there are some areas of the map which look really plain for other reasons.

With a bit of love by a skilled mapper the maps could be made useful. How about adding some dirt patches to hint paths and some more of the new objects?

But before you work on them, keep the aethyra license chaos in mind. Every ae content developer uses a different license for his work. When the maker of the map doesn't use GPL or a compatible license we can not use it for TMW.
Please do not send me any inquiries regarding player accounts on TMW.

Thanks for the suggestions Crush, if I had more time I'd do them. Aroleon - thanks for taking the project, and I look forward to seeing your map.

Clarification: The license is GPL. I'm the author of all of it, apart from concept taken from your (Crush)'s plan and the borders that are copied from maps that exist in both games. All the tilesets used (even the removed ones) are GPL too.
Retired from TMW; incomplete projects looking for a dev:
Cave foliage (plants up the walls): http://forums.themanaworld.org/viewtopic.php?f=8&t=5659
Cave wetwalls (water down the walls): http://forums.themanaworld.org/viewtopic.php?f=8&t=5816
Top
Post Reply
4 posts • Page 1 of 1