abuse to me from some players

This forum is used to deal with abuse in game - abuse reports, bans etc.
Locked
11 posts • Page 1 of 1

abuse to me from some players

hi all .yesterday i asked prsm about what happend between me + legendario and that i didnot want any players to say bad talking about me and asked him too about is that collect items dropped on the floor for about 10 sec(each one) is wrong or against rules or bad and i told prsm that i can give him the dropped items(setzer +bull helmet)if is it anything of this wrong or against rules of game and prsm told me and i quote from his talking that nothing wrong with that or against rules of game if legendario dropped his items on the floor and asked me to tell legendario to speak to him(prsm) about what happend. and i told legendario to speak to prsm about what happend .but legendario didnot care about my whisper chat to him. today what i think about bad talking about me happend and i will show all the screen shots about this and i ask prsm to deal with abusing + insulting from (matto+Ledmitz+ping) to me on the general chat and thanks all for reading this post . 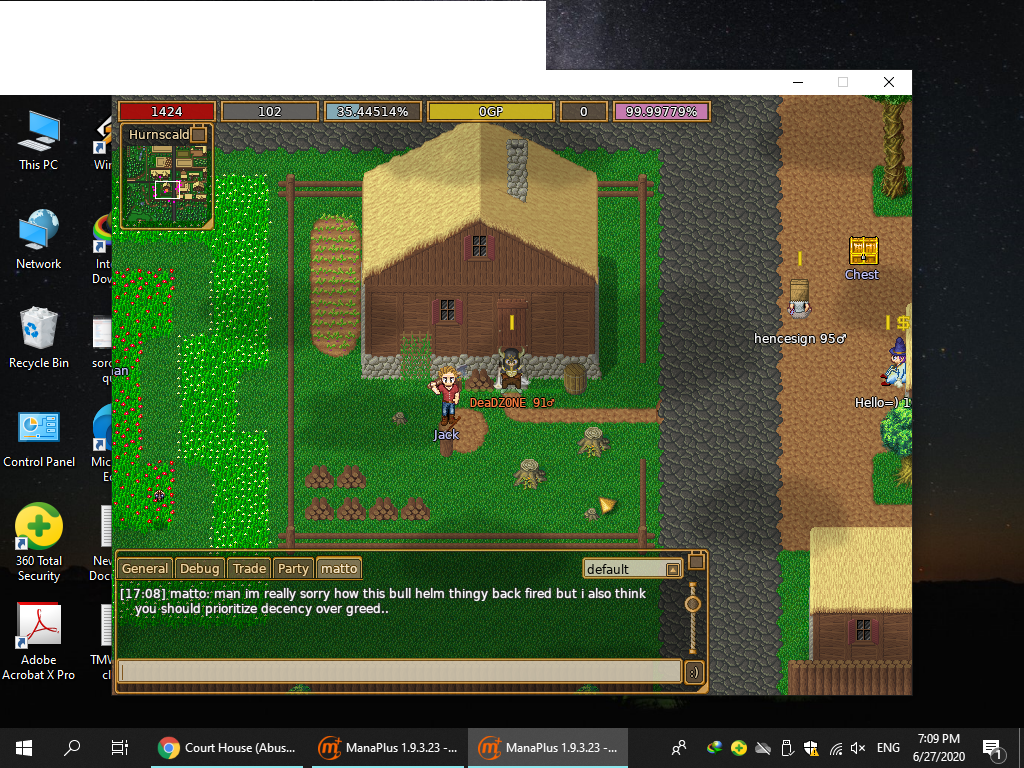 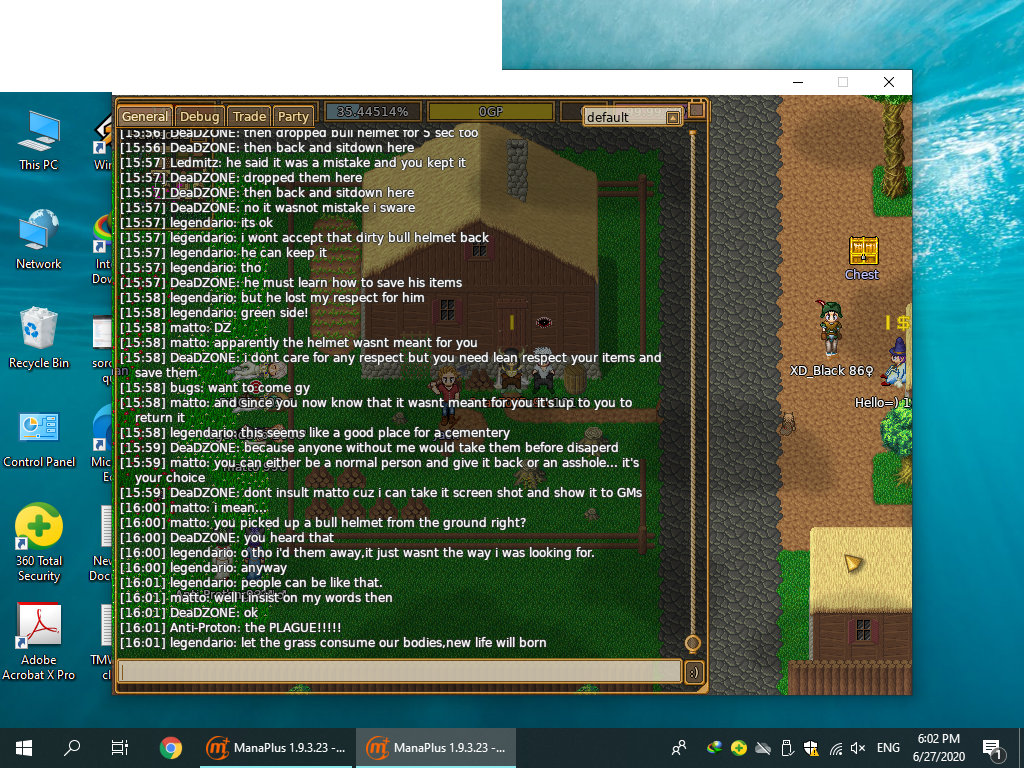 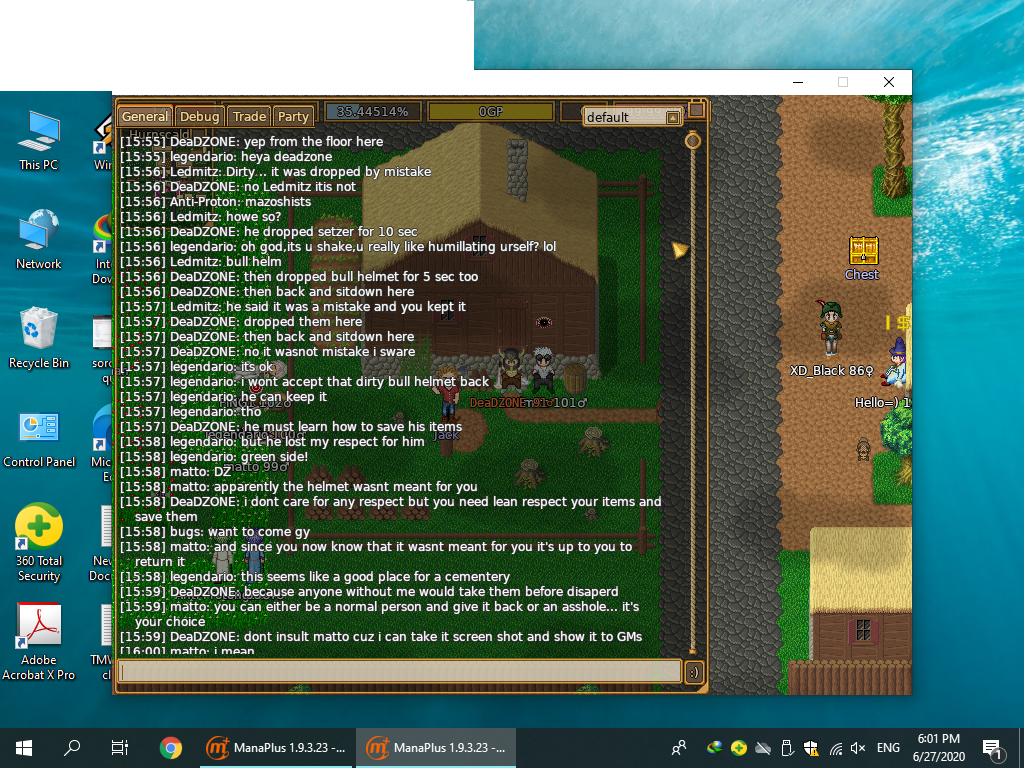 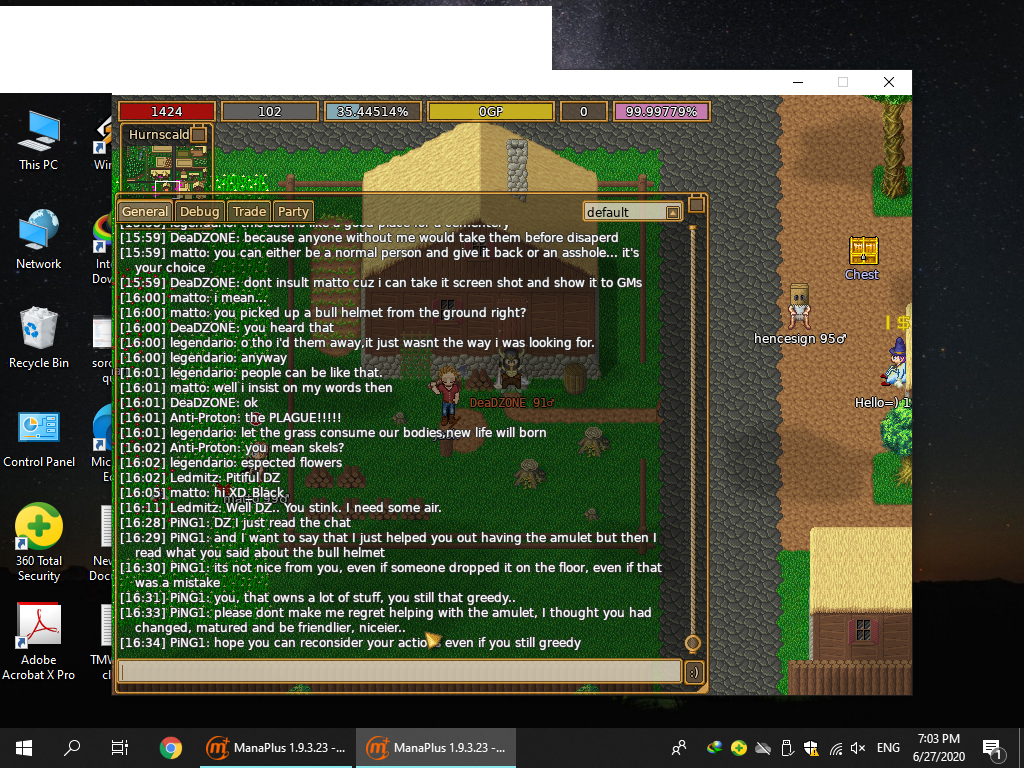 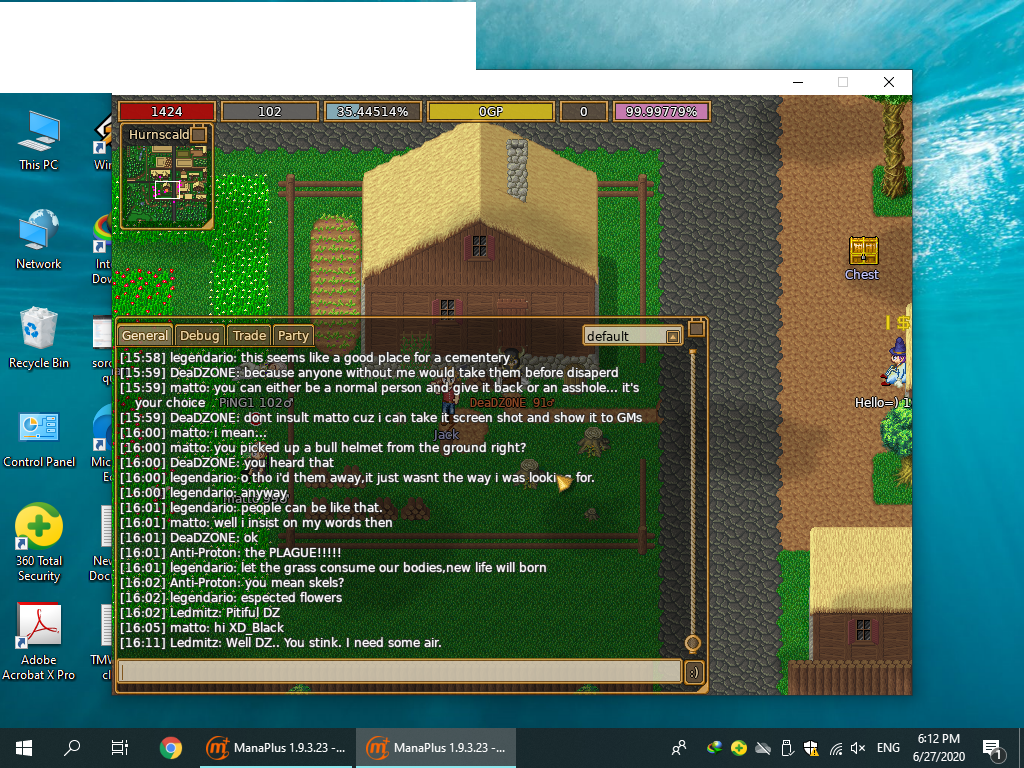 Hello.
I’m starting with the ending of this theme or let’s call it a drama. I strongly believe in other players who have considered this case wrong. There is no rule or anything that any game leader can do about it. It’s up to you to be fair and have a good heart, but you haven’t done it. I express my regret for your loss Legendario, but I am here to help you with that. If you accept, I can give you money to buy it, or an bull helmet that has been lost.
With all due respect
Rubikon

I dont get this post, if Legendairo drops inventory, and a player picks said inventory up.
And Legendario says "I dont want it back".

Why is the player that picks it up wrong?

I don't drop stuff and then don't ask for it back!

There is no crime here or wrong doing.

ego is the anesthesia that deadens the pain of stupidity!
Top

DISCLAIMER: This is a personal opinion and point of view, and the words carries no weight.
The ones responsible for judging, locking, unlocking, or move parts of the thread to off-topic is the GM Team.

So the first and foremost point of my opinion is...:

You might want to get rid of that shady chinese antivirus (360 Total Security) and let Microsoft's built-in (and also free) Windows Defender antivirus handle things. It has much better protection and you're not sending your data (and granting full administrative permissions) to a random chinese company (although sending your data to Microsoft isn't that much better but this can at least be disabled)

That aside, my two cents are:
1. If you don't want to accidentally drop items, protect them in the client;
2. If you are trying to give items to someone else, trade them.

This being said, I myself, more than once, dropped items without realizing.
It happens quite frequently.
It is not difficult to see that legendario is being sarcastic and actually want the Bull Helmet back,
and it is also very evident that the community assumes that the "right thing" to do is returning the item to legendario.
Even I already looted a few items and returned them after realizing they were dropped in err.

This being said, from a Developer stand-point of view, I don't see any illegality in this ordeal.
If the item was on ground, you're allowed to pick it up. When you're not allowed to, the server
protects the item (also known as Kill-Steal Protection, iirc). The case where MVP can loot items
during the first 10 seconds or so.

*cough cough*
This discussion, however, is offtopic.
There was no request to GM Team intervene in that.

This thread was made so GMs could judge the following questions:

Did Anti-Proton abuse pretty much everyone else?

matto said that DZ could be either "a normal person or an asshole"
Ledmitz said that he needed fresh air because DZ stink
Anti-Proton called them mazoshists
PiNG1 said... well, he did not offend directly anyone but he replied so it could also being taken in account.

Other than that.
The Mana World Team do not keep chat logs.
I also don't think Prsm was around by the way he responded to this.
I also don't recall the four players involved (matto, Ledz, Pingo and Proton) insulting anyone in the time I passed in game,
and personally I don't think there was anything serious in terms of insults to justify going after witness and etc.

Therefore, it is highly likely that this get archived.
But this is still up to the GM Team.
To be honest, I haven't chatted with people for a while now, been too absorbed in my piece of code disconnected from reality, so I want to chat about whatever... If my opinions are somehow offensive I apologize in advance and offer to withdraw them. (respected the edit time limit)

I aggre with Prsm.

Now, after putting players against DZ and making him feel bad for something you did, I hope you feel better. Because you didn't wanted DRAMA, AND THATS exactly what you did!

And yes Jesusalva, I clearly see there was abuse here, sadly there was no GM there when that happened. But if this continues in the future somebody will end up either muted/kicked/stomped or banned!

it is true that there is no error from deadzone in this case. I don't see any harm in him, and I don't think anyone wants to be a bad friend to him. I am sure that the legenadrio did not want his article back, because he dont want to become more dramatic. I also don't believe that legendario pushed anyone to speak ill of this player. I said it once and I can say it again. I can donate the same article to legendario. whatever has happened must be forgotten, and the other players mentioned above have only been trying able to return the item. But as I said, come get a bull helmet from me for free and close this post. I don't think long discussions have good effects or anything else. We are all friends and family.
Rubikon.

May I recommend some light reading?

DeadZone. This nickname really suits you well if you matter more to money than friends (despite from being virtual).

I guess that people here really told you enough how to behave in this game and drawing attention for things like this is a real waste of time and makes me sick.
matto and Pingo didn't explicit told you that you are an asshole but warned you about choosing carefully how to behave.
People that really don't give a damn about you will ignore you instead of giving advice, no matter how they do it.

Give back what you didn't own, be humble, patient and friendly. Not only you but all of us will really gain from this.
By the way, I really have enough of that.

Someone please lock the thread: we things to fix and translation to do. It's no use wasting time in dramas.

DeadZone. This nickname really suits you well if you matter more to money than friends (despite from being virtual).

I think this was such a rude comment, and this is not a discussion board!
I don't think this is the correct way of treating others, more when you don't even know how it happened.
And no, they don't have the right to tell DeadZone how to behave, not even you! WHY? because he did not break any rule.

This is a strict moderation forum with the purpose to receive abuse notifications from players to Game Masters, announce their decisions, and allow appeal against decisions which the GMs took.

It is strictly prohibted, in this whole forum section, between others:

Given the GM Team gave a position favorable to the accused players, and DeaDZONE has not displayed intent in appealing on their decision,
This thread has been locked by the GM Team.

(Please use Player Talk or Offtopic if you wish to have a heated argument about kill-steal or complains about the floor management of the game engine.)