Ask for help regarding any technical issue or report any bug or OS independent issues.
Forum rules
Post Reply
11 posts • Page 1 of 1

Hi! I hope I'm not duplicating a report. I did look for it, first, in the forums but I couldn't find a report.

Whenever I touch a Soul Menhir thingy, the dialog gets stuck at the end (see screenshot attached).

I'm pretty sure this is not a connection issue, since I can see everyone running around and talking. 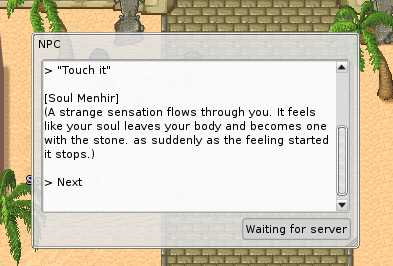 Wiru the Lone Bandit
I solemnly swear I will not be nice.
English/Spanish user
Don't feed the trolls. ;P
Top

There is a bug where the list selection dialog can be hidden by the message dialog. Try moving that dialog around and see if you see it.

This is not the issue, as I have already chosen to "touch it" (thus, already seen the selection dialog). You can clearly see this in the screenshot (it shows the options I've chosen).

Furthermore, moving and resizing the dialog do not change the state of the "Waiting for server" button.
Wiru the Lone Bandit
I solemnly swear I will not be nice.
English/Spanish user
Don't feed the trolls. ;P
Top

The fix will be in the next server update.

Ok. When should I try this out again (to report back)? I don't usually touch the Soul Menhirs.
Wiru the Lone Bandit
I solemnly swear I will not be nice.
English/Spanish user
Don't feed the trolls. ;P
Top

The data is on our testing server.

I can confirm this has been fixed in the testing server.

Edit: Ok, now I get the same problem with the guy in the magic school (in the test server). The guy tells me I'm too young to go to the other side of the room, and the button again gets stuck in "Waiting for server".
Wiru the Lone Bandit
I solemnly swear I will not be nice.
English/Spanish user
Don't feed the trolls. ;P
Top

Yes, that is broken on the public servers, but works fine for me locally.

I have almost exactly the same issue but for me it is much worse, for me this happens with all npc:s!
at least it has happened with all that i have talked to, except the stores and the new storage guy.

It happens every time i press a button that says "next" so im guessing there is a problem with the "next" buttons.
Also, for me the game does not freeze, it shuts itself down and the same thing happens on the test server.

When i run the game through the terminal it says "Segmentation fault" as error message every time it crashes.

Edit: probably not related but i just noticed that i cant pick things up... when i press z to pick something up the game freezes so badly i have to force quit it... so the update made the game totally unplayable for me...ill just have to go back to 0.26 again...

Please make sure you're using the latest git. If your running on a private server that hasn't kept up with the changes we made, then you will have problems.

im on the public server, and i updated and installed everything today so it should be the latest version...
Top
Post Reply
11 posts • Page 1 of 1