All development of pixel art, maps and other graphics.
Post Reply
36 posts

Crush wrote:Those cliffs look very similar to those from the woodland tileset.

I've been asked to confirm that they're not a ripoff, and no, they do appear to look uniquely drawn.

I've got nothing to say but since I quoted every one of Jetryls 1-2 posts in the last years I am doing it with this one too.

But the new cliffs look much more "real"/better than the old woodland ones, altough it still looks very tiled.

The older version of the cliffs is better.

In the newer one, the rocks look more drawn-on, and the diagonal cliffs are just plain strange. Very much like the forward-facing cliffs have just been compressed horizontally.
Top

poison_ivy wrote:I wanted to do it myself but i sucks too much to do it, as everybody saw i wansn't able to do a simple halloween even in 6 MONTHS! since i didn't do it, i don't like it.

everybody already knows this.

So, if i get that right, they look very similar to the woodland tiles (which look good i believe, or am i wrong there?), yet they look plain strange? We want consistency, yet it would be redundant? I'm a bit lost here.
I struggled with the top of those cliffs, but i'm aware it doesn't look good (no need to tell me, unless you can show me better). I'm not happy about it, and anyway i plan a redo with some other, better tiles that another pixel guy nicely sent me. 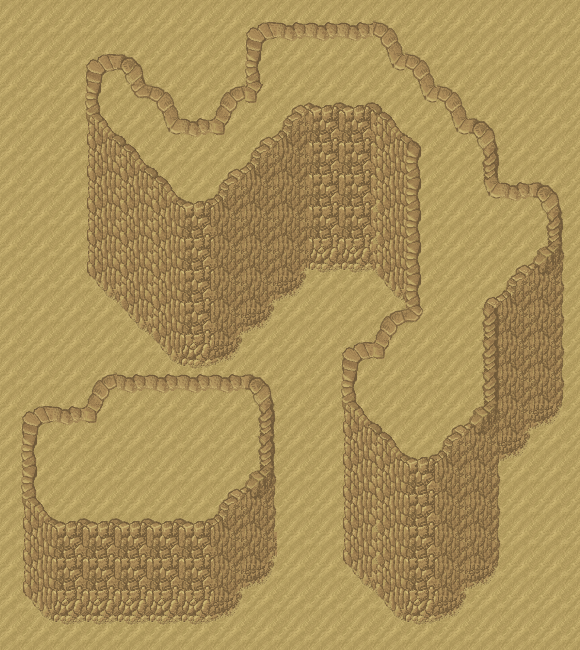 I personally don't see where this new tileset isn't improving the old one?

simply asked: Do you prefer this one or the old one?
Do you think this is an overall improvement?

I like the new ones much better great job

I would only change that one rock that looks like [] going up every few tiles on the front facing view :/
Top

The cliffs IMHO are very nice and improved, I think you just need to give a little more contrast to one of the elements the sand or the cliffs they are sharing the same palette and that makes them look a bit flat, test a few more colors, may be add some blue-ish variations on the sand (preffered) or red/yellow-ish on the cliffs.

@Bertram : I believe this last one i made is really better than the previous one, but it's hard to judge one's own work. From the various comments that have been made about it here, i can't even tell now if it's any good or not... I know my work is not good enough to get into official content, but i'll keep working, and i feel i'm improving slowly, i'm just wondering how far i am from the minimal quality bar.

@meway : Can you point at the one you're talking about? (a little red circle will do) I'm not happy with these top stones and most will be redone.

@AxlTrozz : Thanks. I see what you mean, i'll try various colors and sand tiles to start with, i plan to keep this palette for the cliffs for now. I'll also work on the lighting.
Top

imo ----why not use both tile-sets ....in some games different/smiler looking cliffs are used to show different parts of the world..may be one is up high and the other down low...

any way i like what you have done so far..

I agree with AxlTrozz
I would like to see more contrast (in every sense of the word).

Make no mistake, I like what I am seeing too.

Taking this the next step further will be to add decals and variation tiles so not all cliff faces are straight cut walls: 3d shape, organic shapes.

Potential inspiration for possible shapes:
http://www.google.com/images?q=cliff%20face
This message used to be meaningful.
Top

Here are a couple of nice desert cliffs:

I'll keep working on that. It might take a while before the next update though. Meanwhile, any palette suggestion is very welcome.
Top

We worked on some new texture for this set:
examples

The texture #3 is quite good, imo.
Please do not send me any inquiries regarding player accounts on TMW.