Where game and project announcements are made.
Post Reply
6 posts • Page 1 of 1 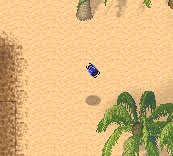 I am the Mana Bug, and I inhabit Candor and Hurnscald mostly!
But the truth is, I'll go wherever players go, and if you kill me - Another one will raise!

Oh, and don't worry with those developers trying to squeak me, they most often just manage to script two more friends for me

On today's post, I'll present you the bugs which happened last night!

First of - The SSD on which Legacy servers were running was wiped clean during a scheduled Azure maintenance, and all game data was lost. TMW Main Server was lucky as we have backup scripts keeping it safe, and gumi managed to restore a rather recent backup; Only a few hours of progress were lost.
Unfortunately, TMW HardCore did not had the same luck, and all player data was lost.

Gumi was very dissatisfied with that, and said he will continue development on TMW HC. Of course we loved that idea - It means we'll get more brothers and sisters bugs! Come to see us once this extended maintenance period ends.

Legacy Test Server was also affected, but as it was a test server it caused no commotion.


AND NOW FOR THE BIGGEST SHOW! As many of you noticed, we broke the level limit, and current new max level limit is 135. We (the bugs) want to thank gumi, this bug would never be seen by players if he did not came up with HC idea. You rock!

Now, gumi said he can try to fix it this week. We the bugs are not happy with that, because, you know, at level 135, It is possible to get max stats on all stats. (According to TMW-BR bugs, at least).

So, we're doing this OFFICIAL POLL to ask gumi to don't fix this bug! Hey, a buggy world is a fun world, or at least, we bugs think so.
Do you agree with us? Then please vote whatever you prefer. Oh well, we're sure if gumi tries to fix he'll end up writing a bug instead, so no hard feelings if you support the fix.

Well, while gumi is around, we'll see what else we can break

Keep an eye out for us, because where there are players, there we will be

PS. TMWT/TMWC reserves itself the right to delete replies in violation to the rules, to lock the thread, or to move replies to another thread if we deem this will improve readability. Also, the developers reserve themselves the right to fix the bug if they decide this have unforeseen impact, like an unreasonable increase on memory load or data loss, for example. By last, we may also move this topic elsewhere if we decide the topic is no longer a news but rather a player talk.
Last edited by jesusalva on 02 Oct 2019, 16:47, edited 2 times in total.
Top

So.. what actually happened is our Azure VM comes with a normal HDD and a "temporary" SSD, which we use to run tmwAthena because it makes heavy use of the disk and a HDD would make it too laggy since the user database is quite huge (there's hasn't been a purge since forever now, and we don't plan to do any purge in the foreseeable future). We have 3 scripts making backups of the user database every hour (one copies from SSD to HDD, another makes a backup archive, and a third one uploads the archive off-site where it is then further compressed, encrypted and uploaded to Amazon Glacier). When Azure does scheduled maintenance it may wipe temporary disks of VMs and normally our VM should have been able to then copy from the HDD to the SSD to get everything back like it was but since the hardcore server is relatively new it was not yet included in our backup scripts

I already planned to reset (purge) the hardcore server once I'm done balancing the gameplay so this kinda speeds things up. Currently the mobs are not harder, there's just more being spawned and they have a higher crit rate. The hardcore server should be back online when I'm done fiddling with it.
Top

I'd say "Keep it at 135". Or whatever level that doesn't causes major bugs. I'd also say it better to have XP tables really difficult for highest levels.

Reason is simple: one of most annoying TMW misfeatures would be "waaaay too fast leveling". That exists at least since GY introduced or so, so ppl can kill monsters giving ~5000XP real fast. And even at fairly low levels (as archers) if careful enough. On side note, I bet skeles should be way more resistant to arrows - normally I would expect most arrows just fly through skeletons without even getting stuck, not to mention any damage

What's the prob? Ppl reach 90+ and even 99 rather fast. Some ppl start alt-mongering, but since it doesn't really brings anything new, people eventually get nothing to do, bore out and less motivated to return and/or take active part in gameplay (as hunting for XP is not an option anymore, killing off significant part of motivation). So I got idea bunch of high levels that are really challenging to reach looks very relevant. As long as it does not brings some woeful balance issues though.

p.s. I know some games where players can get to lvl 255 in about 250 different skills (so "real" maxing out is "unobtainable within lifetime of human"). I'd say it mimcis RL - after all, humans usually have option to improve their skills even further, in one domain or another (as long as they want to do that and invest some efforts and time actually doing so).

p.p.s: as for "hardcore" I'd say it has been really nice idea on how one can try different gameplay while it stays "cheap and dirty". I really like that idea - even though it isn't without its limits. Kinda sad if data got lost.
Top

I think Wonky World might become real! A world of bugs with everything in it! viewtopic.php?f=4&t=20748

All that artwork will be in it. We'd glitch, cut, copy, paste code and goof off. ohhhhh

Yep I voted for the bug kekekeke

This is a great idea, a new challenge on the main server, lets see who reaches the new max level first.
Top

The game is well balanced already, we shouldn't fiddle with level or other such major parts of the game.
I think we should leave level at 99.