Can We Reduce "Botting" ?

Got something on your mind about the project? This is the correct place for that.
Forum rules
This forum is for feature requests, content changes additions, anything not a Bug in the software.
Please report all bugs on the Support Forums
Post Reply
121 posts

this post is about "We need more GMs and why you have to create the Deputies dear admins ?"

I don't see the need of another GM and less the creation of Deputies corp ! (or maybe only some people want a promotion and/or think they deserve it...)

Delation, reporting,... stop for a moment please... Where are we standing ? ( i don't say that in repeated way of bad behavings or repeated botting action... but don't make a rule about that: i sware i will report anbody that infriges the tmw rules and so on... omg...)

Do you want a game in which nobody talks or everyone one goes alone in order not to get reported as they don't know who is who in this tmw "i have 40 chars"... Stop that please...

It seems to me also that there is a very good communication between the GM's Team and the veteran in game. Enought for them to have references and experienced opinions and also i am sure that the GM team make their own opinon on it and then discuss them together as a team.

and play the game

ya sorry about that goku I needed my wrest :/
Top

No, it was my fault. Read the PM I sent you Meway.
IGN - Trunks
Pixel Artist In Training
Work On Forest Armor
And Forest Monster
Top

Personally, i think adding a deputy position could do quite a bit of good. i also don't see any downside to such a position. we can certainly trust the GMs to choose good people, and to review any action from deputies. it sounds to me almost like an "employee of the month" position: there might not be any real benefits, but they might be people you take more seriously, or they'd be first in line to promote to GM.
it would be helpful there, too, since a deputy would have a reputation with the existing GMs, and proven himself generally cool.
Top

Giving the ability to warp is just an idea Wombat. So if the person is botting he can warp him to botcheck map if no Gm is on and leave him there till there is one. If he's not botting he of course would then reply once warped.
IGN - Trunks
Pixel Artist In Training
Work On Forest Armor
And Forest Monster
Top

lol i think they would be confused as of why there stuck in a room with no way out wile there in there, that would make the gms have to check that frequently, lol i would laugh so hard if i was a gm and saw them freaking out... because i would know I would be suppose to ban them on top of that. thats what we should do to all botters leave them in a big cage_map. with no monsters or one big monster that is invincible if you try to attack him he kills you but your saved inside the cage like a check point
Top

There is not enough botters to even justify this position. And no, I don't "trust" the GMs if it means unswerving loyalty to some people I don't know. I especially don't trust handfuls of what were regular players running around with their little narc hats on. With power comes the justification for more power. I think y'all just need to find something to do.
Current character is "Abolish".
Top

ya know that this thread is turning old wombat is making more seance but until somone comes with a better idea I'm going to stick with what wombat is saying i just get blown off if i ay anything so it don't matter. :/
Top

Okay Wombat you've found your thing to do, so maybe you don't care about the game anymore? If so that's fine.. and you have your opinions and ideas, and others have theres.
IGN - Trunks
Pixel Artist In Training
Work On Forest Armor
And Forest Monster
Top

Goku, you can't explain yourself, you can't even prove your point. There is no reason for "deputies" to be implemented in the game. 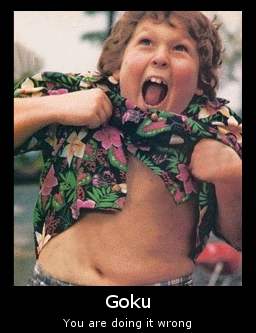 This thread initially was about using automated methods to handle botters. Now it has been open to ways we can control bots other than relying on GM's.

Back on topic:
I'm not sure if a "/GMhelp <message>" will be useful. You can always /w a GM, or report player to Abuse forum. Current GM's are here: http://wiki.themanaworld.org/index.php/Game_Masters.

It would be helpful if there was a way to view GM's online so you could inform them immediately though.

Fother J has taken the initiative to make a list of the places where players are most likely to bot. http://forums.themanaworld.org/viewtopic.php?f=4&t=6685

/w GMName i am offline please try to contact another GM or leave a message on forums.themanaword.org/nameofthebloq

/w GMName I am offline but you can send me a PM on forums.themanaword.org/

And that's for you to decide Wombat? Anyways i'm done with you. Why not try and contribute to the purpose of this thread instead of just turning down everyone's idea? That's the easy part. Try coming up with something for once. And have fun with your pictures.. those types of things are olddddddd. But w/e you can come up with.
IGN - Trunks
Pixel Artist In Training
Work On Forest Armor
And Forest Monster
Top

Boo hoo Goku. Why don't you go find some bots and prove your point instead of crying at me because you can't back up your argument.
Current character is "Abolish".
Top

Wombat and Goku, the comments from both of you are very counter-productive. I would prefer when both of you would stay out of this topic.
Please do not send me any inquiries regarding player accounts on TMW.